Today was the first day for world championship action in Unipol arena. The morning started early, as typical to the circumstances. The breakfast in the hotel could not be moved to an earlier time, so the plans for getting breakfast were postponed instead. The entire Team Finland arrived at the arena either by foot or by car, and got organized for the mandatory veterinary check. The sometimes dreaded measuring for those dogs competing in AWC for the first time didn’t give any issues for Team Finland, and apparently none of the entered dogs were disqualified either – history remembers all too many cases where the dreams for competing in the world championship have become much more complicated at the measuring table.

A training slot of about 8 minutes gave the teams some time to get familiar with the surface, which was in general taken quite well. An artificial grass layer on top of concrete may be somewhat hard for the dogs, but at least it was neither all too sticky or dangerously slippery. On the photography side, the combination of a fresh artificial grass and floodlights right on top of the course will inevitably result in pictures where black-and-white border collies have black-and-white back – as they should – and black-and-green underside. Of course, such a miscoloration is not limited to the dogs, but handlers tend to get greenish faces. However, a cocky handling style with the nose held high would help in this matter, but of course all competitors at this level are very civilized 🙂

Another issue quickly unraveled in the beginning of the training session: although the lights don’t have a difficult blinking problem (w.r.t AWC2011 or AWC2012) the center of the course area is lit much more intensively than the corners of the grass. Although the spectators might notice this only as a nice focusing effect, for the camera the situation is more complex as the intended exposure can vary over a full stop. As previously, constant adjusting of manual exposure was the best option, as the half-automatic exposure gets fooled quite often. While the exposure can be easily altered in post-processing, it still needs an extra bit of concentration for getting the pictures close to the final form in-camera.

The opening ceremony introduced all participating teams with some cheerful soundtrack banging on the background. Or on the foreground more so. Pretty soon the sound level felt high enough to exceed most health recommendations. In this case ‘loud’ was not at all the byword for ‘better’. I saw and afterwards heard (barely) that spectators as well as competitors were covering their and dogs’ ears – for a good reason. Long after the ears felt having had a good beating. One can only wonder how loud the traditional dancing sessions will be in the next days… It’s not only that a far too loud sound may start to feel uncomfortable, but it really takes its toll on trying to keep focused on the job at hand.

The only competition of the opening day was a good example of world-class agility with many fine runs, few outstanding ones, and great cheering for and living with the national teams – a very nice atmosphere for a Thursday evening.

For the small and medium teams, AWC will truly start early tomorrow, and eventually the agility people will have the first two team world champions for 2015. Before that, it’s still time for a set of card game: 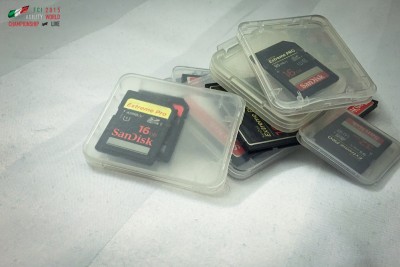